Kooringal Stud showcased the outstanding quality of its yearling draft on the impressive new parade ring on Friday, December 4.

Twenty one well grown youngsters were given a thorough inspection by the large crowd in attendance at the stud.

All of the yearlings – comprising 11 colts and 10 fillies – are being offered unreserved at the Inglis Digital Online Sale from December 11 to 16.

William Inglis and Sons General Manager of Bloodstock Operations Jonathan D’Arcy was a special guest at the parade.

Mr D’Arcy provided a detailed appraisal on each yearling as they strutted their stuff on a sealed runway surrounded by lush turf adjacent to the stable complex.

“The standard of the draft is extremely high,” Mr D’Arcy said.

“There are some impressive individuals among them and I am sure the sale will attract a lot of attention from buyers.

“They have been presented in excellent order by the Kooringal team and paraded in a professional manner.”

This is the first time in Kooringal’s history where all yearlings will be sold online in preference to the sales ring at the major auctions in early 2021.

Colts and fillies by proven sires Duporth, Magic Albert and Epaulette as well as the exciting young stallions Impending, Super One and The Brothers War are included in the line-up.

The beautifully balanced Impending colt from the Doomben-winning mare Nardoo turned heads at the parade.

“He is a compact sprinting type with such a strong hindquarter,” Kooringal’s Angus Lamont said.

“He’s a spitting image of his grandsire Krupt and is developing into a lovely individual.”

Impending was a dual Group 1 winner of the Stradbroke Hcp and Kingsford-Smith Cup and accrued more than $2.4 million prizemoney in his illustrious career.

Nardoo bolted in by six lengths on debut at Doomben and went on to win three more races in just 13 race appearances.

Duporth has a colt on offer from Ingham Magic, who registered three wins in Sydney and almost $200,000 in stakes.

The Super One youngster from the excellent producer Makemeasupermodel is expected to be among the most highly sought fillies in the Inglis Digital sale.

Makemeasupermodel’s recent success stories have been the smart sprinter Kookabaa and the promising Spiranac, who have combined for seven wins from their past 11 outings. 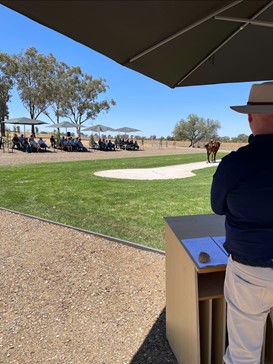